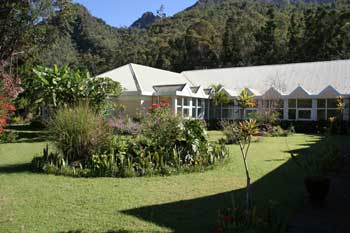 Nestling in the cool of the Indian Ocean, the circle of Cilaos, in the heart of the Reunion
Islands rose from the ashes of an ancient volcano. This heritage gave way to a majestic
preserved landscape which is today the Cilaos Hot Springs.
Difficult to access, this oasis, this fountain of youth, owes much of it’s fame to these
renowned waters.

The existence of the springs was probably known by the first settlers in this region around the end of the 18th century, but they were officially discovered in 1814 - 1815.

Around 1817, the French administration sent the botanist & naturalist of the King , Monsieur
Bréon, & Dr. Sénac, to analyse the waters & to verify the authenticity of the findings. The
samples were sent to the mainland resulting in a publication of the findings.
In 1969 new research established similarities with that of the waters of Vichy, classified as having  bicarbonate of soda, magnesium & calcium’ as minerals of between 1200 & 1700 mg/l.

The first thermal establishment of 1837 was carved directly from the rock.
At the end of the 19th century, a new building was constructed under the supervision of Dr.
Mac Auliffe, curator of the Reunion and it’s sister Islands ( Mauritius, Madagascar,Comores).
1988 saw the opening of an entirely refurbished establishment, answering to the needs of curative treatments & well being.